So, let's hear what they have to say to our interviewer Gab “Corino”:

I started this hobby 3 years ago...so I'm still a newbie! I ran with Mini 4WD for 18 years and now I'm simply using the same building skills, tools and materials with Gunplas (like dremel and carbon fibers). I'm an abnomal “Gunplaro” since I never watched any Gundam-related Anime, I'm more of a pure model builder, which can be a big flaw but I find that is really a great strenght since I'm not influenced by story lines or by the rules of the various universes. I can appreciate a model for the model itself, not for what it represents.

This year, like last year,I kept my style using LEDs, optical fiber and clear parts, and now the “Tron effect” is my signature. Most of the work was focused on kitbash and in the design/building of the backpack and the laser rifle. Everything is powered by 4 lithium batteries inside the model, but it was a risky choise that I don't think I'll do again: it's too hard and troublesome to handle. Sadly I didn't have much time to change the project at that point. As I said, I'm still “new”, but the important thing is to learn from our mistakes.

For next year I'm already planning some works, and I want to improve myself again. Winning a title does not mean that you've learned everything, or that now I'm a Gunpla Master. We have a lot of model builders really capable and from them I want to learn: those are the people I want learn from. I've been so lucky in being part of this great group of talented people with such skills and experience. Team “Nu Type” was born in october and I hope to contribute with it to keep high his name.


Thanks a lot for your time and enjoy your trip to Tokyo!

It all began 10 years ago, I was in Japan for work and roaming in the malls I kept seeing those robots that reminded me so much about my childhood. The night before my flight back home, while dining, my colleagues gifted me an RX-78-2 Ver.Ka model kit and I haven't stopped since. I took part at several international and national contest, and luckily I've always won something...

My diorama for GBWC is composed by two different model. The Geara Doga Full Frontal hasn't got big modification, I simply strech the chest and added some details and panel lines. The model that really took some work is the Delta Kai Ground Type, which is 70% self-made just like the base of the diorama.

In the next future i've been invited to an international group build called “Clash of Titans” who counts 20 among the best names in gunpla building. It will all start on January and for now I can't say much more. After that I'm gonna commit to 1/100 PROJ-003 “TIEF STÜMER” by Mechanicore

Thanks a lot for your time and congratulations again for your great work!

I'm a Gunpla fan since 2010, but I'm really a Gundam fan since the '80s when, as a child, I watched the series on TV. I've approached the modeling world to follow my passion for the White Robot. Right now I'm working on my favourite kit: Nu Gundam MG 1/100 Ver. Ka. And after that I'm gonna start with some little dioramas (but they're just ideas atm) in 1/144 because that scale is really fit to custom the kits and simply because they don't take too much room. To be honest I can finish only 1 or 2 kit at year cause I don't have all that time, but I'm confident that the less fast you work, the better the final result: as people use to say: it's not the quantity but the quality that counts.

My diorama is inspired by a couple of Gundam Anime that I love: Gunpla Build Fighters and 0080 War in a Pocket. I love working with 1/144 hg kits because they're detailed but at the same time they have so much room to improve and custom them. I'm really keen of mono-eyed suits and the Rick Dom is one of my favourite, so I took it and put it in a city environment with the title “City Hunter” since it was the first time I have approached this kind of diorama. The customisation of this kit are:

- I added some Pla-Plates (both custom plasticard pieces, both additional parts) from legs till the head.

- I added some metal parts.

- I inscribed a lot of new panel lines (more or less a month went only for panel lines.)

- I kit-bash with some cannon parts from an HG Ball from a previous work.

- I inserted (in the back skirt) cables and batteries for the 3 LEDs: 1 for the monoeye and 2 more in the thrusters.

I completed the kit with some custom paint, some Tamiya weathering and I put it all on top of some little pads made from wadding and DAS (material similar to clay) to simulate the smoke. As for the building I look for some pre-build 1/144 ones but, having found nothing, I resorted to PaperCraft: I printed on paper some models that I liked from Scalescenes (scale N railway, which is circa 1/150) and then with cardboard, cutter and glue I created the scene. Then I added some lamps and car models using the N scale. As a final touch I put a Gunpla Build Fighters store sign (it says Gunpla Academy). I think that the result is a diorama well balanced, really faithful and symbolic of the two anime I was inspired from. I can really feel like my objective has been reached this year. This diorama has been awarded both nationally and internationally: second prize at the GD Contest 2015 and third price at GBWC 2015.

Right now I had to put my hobby on hold since my first daughter arrived, and she keeps me very busy :D But I've got a few ideas, like a work with an SD kit and another diorama with a space setting, but it's all depending on how much time I will have in the future... anyway never stop modelling ;-)

Thanks a lot Max for this time, and thanks for the beautiful explanation, that will surely spark new ideas in other model builder! 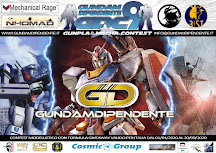